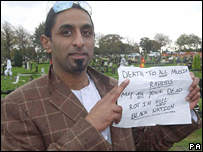 Dozens of Muslim grave stones have been smashed and pushed over in a cemetery in Handsworth in Birmingham. The desecration was discovered on Friday by relatives visiting the Muslim part of the cemetery. Leaflets were scattered, with insults against Muslims which were attributable to “Black Nation”.

An unheard of group calling themselves the Black Nation has desecrated Muslim graves in Birmingham. There is speculation that the attack was not the work of African-Caribbeans. One Birmingham source said he had never heard of the “Black Nation” and that the incident had all the hall-marks of outsiders, possibly the far-right, trying to provoke further violence between African-Caribbean and Asian youths ahead of the weekend. The far-right has a long history of grave desecration against Jews and Muslims. None of the African-Caribbean figures Blink has spoken to had heard of the “Black Nation” raising the possibility it was the sort of stereotypical name a white racist might make up.