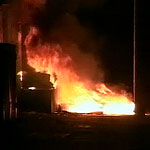 The right-wing myth that the unrest in France is the result of an “Islamic uprising” has been rather undermined by the observable reality that French Muslim organisations have all intervened to oppose rioting. So some “Islamic conspiracy” theorists have found it necessary to shift their ground. Now, it seems, the real danger lies in the fact that Muslim organisations have intervened at all:

“These groups don’t preach violence, but they do advocate something that is troubling Europe’s secular democracies: that Muslims should identify themselves with their religion rather than as citizens. Effectively, they are promoting a separate society within society and that brand of Islamist philosophy is seeping into many parts of Western Europe. Countries from France and Germany to the United Kingdom and the Netherlands haven’t succeeded in integrating their Muslim minorities – and Islamic organizations have carefully positioned themselves to fill the breach.

“The riots ‘are a blessing for them because it gives them the role of intermediary’, says Gilles Kepel, a scholar who has studied and written extensively about the rise of Islam in France. That, in turn, puts them in a stronger position ‘to force concessions from the state’, such as demanding a repeal of the law France passed last year banning headscarves from public schools, he says.”

Robert Spencer, though, has carefully considered the evidence and, on balance, prefers to stick with the view that it’s probably the result of a carefully prepared jihadist plan.