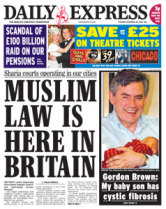 Last night politicians and religious leaders expressed outrage that sharia law is gaining an increasing foothold in our society. The hardline Islamic law allows people to be stoned to death, beheaded or have their limbs amputated.

Critics insisted Labour was allowing a chaotic two-tier legal system to flourish in the name of political correctness. And legal experts warned that it meant the authority of British justice was being undermined.

Sharia law dates back to the 10th century. In some countries women are stoned to death for adultery or giving birth out of wedlock and thieves can have both arms amputated. In Saudi Arabia, murderers, rapists and drug traffickers are publicly beheaded with a sword. The Islamic law also deals in all aspects of daily life including marriage and divorce.

Yesterday experts insisted the Government had already allowed elements of sharia law to be introduced. The Treasury has brought in measures including interest-free loans and mortgages which comply with the Islamic law. But it was also alleged unofficial criminal courts are meting out their own justice.

The scandal was outlined on BBC Radio 4’s Law in Action programme which uncovered evidence that Muslims are using their own laws here.