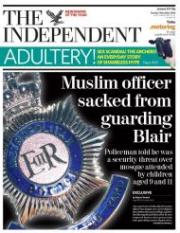 An experienced Muslim firearms officer has begun race and religious discrimination proceedings against the Metropolitan Police after he was removed from a close-protection unit guarding senior dignitaries, including Tony Blair.

Amjad Farooq, 39, a father of five, was told he was a threat to national security because his children had attended a mosque associated with a Muslim cleric linked to a suspected terrorist group. The officer was also told that his presence might upset the American secret service which worked closely with the Met’s close-protection group.

PC Farooq’s solicitor, Lawrence Davies, of the law firm Equal Justice, said last night he was unable to comment in detail about the case, but did say:

“We live in a society where it is possible to point a finger at a Muslim abroad and say that they have WMD and are a threat to national security and no questions are asked. Now those who ‘protect’ us feel emboldened to point the same finger at British Muslims. Muslims are labelled guilty by association. Doubt is insufficient to save them. They are assumed guilty before being proven innocent. We are very close to living in the days of Salem. If the head of counter-terrorism becomes a Witch-Finder General then any Muslim or Muslim-looking person or sympathiser best take cover.”

Update:  The fascists claim that the case “highlights the difficulties facing our security services as they wrestle with the need to maintain national security against a threat of global Islamic jihad, while at the same time having to play ball with the multiculturalists who have scant regard for Britain’s national security. The multiculturalists demand that ethnic and religious minorities need to be more ‘represented’ in the Police, security agencies and the military, yet a dilemma arises when it is clear to the very same security and intelligence agencies that a sizeable fifth column of dangerous extremists lurks within the 1.8 million strong Muslim community who want to wage about a jihad (holy war) against the non-Muslim population.”