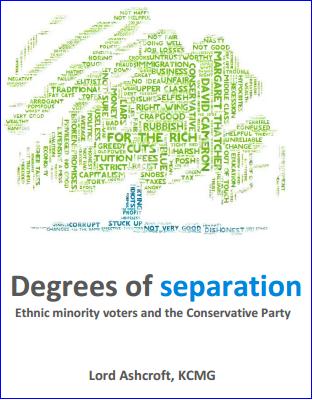 The Conservative peer and party financier Lord Ashcroft has published a study titled Degrees of Separation: Ethnic minority voters and the Conservative Party. It can be consulted here, and has some interesting statistics concerning the attitudes of British Muslims towards the Tory Party.

One question was: “Do you identify with a political party – that is, do you think of one party as consistently representing people like you, and you feel an affinity towards that party beyond the question of how you vote. If so, which one?” 47% of Muslims said Labour and only 5% Conservative.

68% said that Labour shared their values, whereas only 26% thought the same about the Tories. 76% believed that Labour understands minorities compared with 32% for the Tories. Asked which parties believed in equal opportunity for all, 79% said Labour and 34% Conservative.

Degrees of Separation also reports the results of focus groups that formed part of the study:

“Several Muslims – and a number of Hindus and Sikhs – said they had suffered more abuse or hostility since September 11, 2001. Generally, participants did not feel they experienced direct prejudice on a regular basis. However, when participants were asked which of the three main parties people probably vote for who have unfriendly attitudes to minority voters, the Conservative Party was nearly always the answer.”

“There was some debate among participants over how much, if at all, the Conservative Party had changed in recent years, or since their parents or grandparents came to Britain. Most thought it had changed somewhat, whether through necessity or principle…. However, for a number of black and Muslim participants in particular, any apparent change in the Conservatives had been cosmetic. They cited the lack of minority Conservative MPs and party members, the view that the Conservatives do not actively engage with minority communities, and a feeling that whatever they may say, Tories as a whole do not really like people like them.”

Ashcroft argues that the tendency of minority communities to vote Labour is “primarily a matter of class and occupation rather than ethnicity”. It is of course a psephological truism that voting behaviour is linked to income (although if you’re Ken Livingstone you’re not allowed to say that). However, as Ashcroft himself points out: “Many also felt that Labour supported them not only in class terms but as members of an ethnic minority. Labour was regarded as more engaged in their communities, more positive than others about the idea of immigration, and more committed to promoting equality and opportunity for ethnic minorities.”