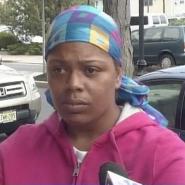 Being of the Muslim faith, Gordon says she can’t remove her scarf for religious purposes, and never in front of men. “They actually want me to take my scarf off in front of the whole courtroom, which I can’t do that, it’s against my religion,” Gordon said.

According to Sheriff Frank Balles of Atantic County, officers posted at the courthouse didn’t recognize as part of a religious attire, and that the scarf didn’t exactly match typical Muslim clothing. “The scarf that she had on had no resemblance to a religious headgear whatsoever,” said Sheriff Balles.