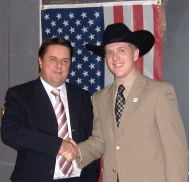 Griffin was originally supposed to deliver a lecture on the dangers of radical Islam but protesters demanded he answer questions. In a two-hour cantankerous give and take with more than 75 protesters and 30 supporters, Griffin delivered a range of views.

“Muslims gang rape women in Norway and other cultures. Only Muslims do this,” he told the crowd.

Explaining why he was qualified to lecture at MSU about Islam, Griffin responded, “My credentials are I have a degree in history and law. I am significantly older than most of you are here, and I have spoken with many, many Muslims.”

Griffin also called protesters stupid, accused them of being bussed in from Detroit, and of being lesbians. He also told protesters he would “shove” homosexuals back in the closet and “kill them.”

Prior to the speech protesters complained of Griffin’s party’s racist agenda that includes the removal of all non-white people living in Britain, and his alleged Holocaust denial. He reiterated during Friday night’s session that “it is a well known fact that the chimneys were added” to concentration camps after the war.