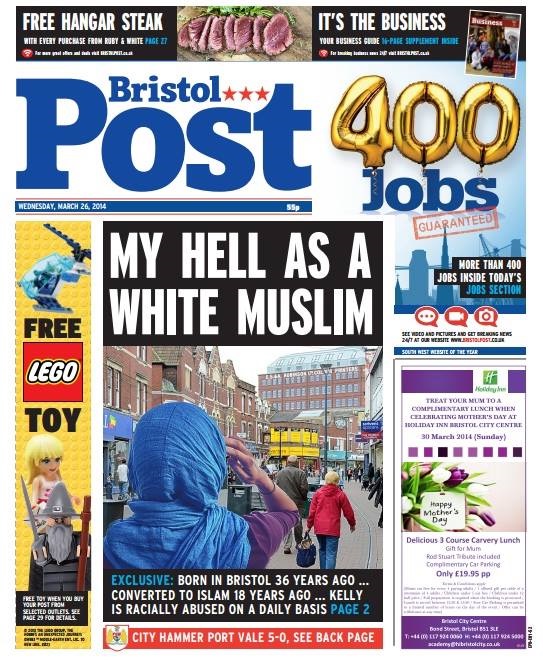 Assaults, insults, sly remarks and threats. All have been hurled at Kelly Ziane since she converted to Islam at the tender age of 18. She was not coerced, nor did she change her religion in order to marry – she did so because she believed it was the “right” faith for her.

For a white girl from Bedminster it was a bold and radical change to make, something she has been reminded of on numerous occasions since then. But the 36-year-old mum-of-three has not wavered from Islam – she says her skin has grown thicker and her resolve stronger, even when she felt forced to take her children out of their primary school because she was racially abused by another parent.

Kelly contacted the Bristol Post after we reported on a racially motivated assault in a Bedminster shop last week.

She said: “I saw the news the other night, about the Muslim women attacked at Poundstretcher in East Street, and there was a police officer saying racist incidents are very rare in Bristol. In my experience, that’s not the case at all.

“I converted to Islam 19 years ago. I grew up in Bedminster and over the last ten years it’s got a lot worse. I don’t have enough fingers to count on my hands the number of incidents. It gets to the stage where you don’t see the point in reporting everything that happens to you. I know I should, and I would urge everyone to report hate crimes, no matter how small.

“The insults used to bother me, but over the years you get used to blocking it out and carrying on with your life. If you let it get to you, you would end up feeling so hateful towards everyone. You have to have strength, otherwise you might end up thinking I can’t do this, it’s not for me.”

Kelly said the abuse has varied over the years, from being spat at by a man who tried to pull off her headdress (hijab) on her way home from work, to being called a “Paki” and a “raghead” by women in shops, to the ignorance of being asked whether she speaks English in everyday situations.

Arguably the most extreme incident was in 2011, when a man drove his car at Kelly, her two daughters and son – whom she does not want to name – as they crossed a road in Bedminster. He revved his car and sped towards them before screeching to a halt and shouting abuse at them out of the window. Kelly says he was convicted of a driving offence and given penalty points. After that incident, one of her daughters, then 18 months old, started repeating the “Paki” slur she heard.

Kelly also said she took her eldest two children out of their previous primary school, Compass Point on South Street, when she was racially abused by another parent in the school grounds and felt the school did not deal with her complaint as well as they could have.

When asked why she feels she has been subjected to so much abuse, Kelly said: “I think it’s a combination of things – negative stories in the media about Muslims, incidents like the killing of the soldier in London (Lee Rigby) and international events like 9/11. After things like that, it can get really tense.”

Kelly converted to Islam when she was 18, after going to a meeting about religion in Newport. The former Ashton Park pupil, who prays five times a day, recalled: “I was a Christian and had been looking for the religion that was right for me. I came out of that meeting and I knew Islam was. My religion has been a massive part of my life since.” Kelly had an arranged marriage to Algerian husband Abdelkadir when she was 26.

“I had a mixed reaction when I converted,” she added. “I found the people who had a negative reaction didn’t really have any idea what Islam was about. But I also had a lot of support. I’ve still got friends from when I was a teenager.”

The foot health practitioner added: “To be honest, most of the time I don’t think it’s about the colour of my skin – I think it’s purely because I have my head-dress on. I often get asked if I’m Syrian, because I have very fair skin and I’m a Muslim. But I’ve also been called Somali and I’ve never seen a white Somali. But there are lots of Asian and African Muslims who get abuse too. I lived in North London for a couple of years and didn’t have any problems there – only when I moved back to Bristol.”

Her husband can only recall two incidents where he has been verbally abused.

One of Bedminster’s ward councillors, Colin Smith, can only remember one example of a resident coming to him after a racist incident, since he was elected in 2007 – a Somali family getting verbal abuse in Ashton Vale.

“That is not to say there may have been other incidents but none brought to my attention,” he said. “My ward is typical of most and I can honestly say there are no significant negative attitudes towards ethnic minorities and public incidents are extremely rare. Bedminster is a traditional, working- class area, with a history of tolerance towards in-comers of all ethnic backgrounds, religions and lifestyles. Having said all that, last week’s incident in Poundstretcher was disgusting, abhorrent and disgraceful and I welcome the finding of the perpetrators by the police.”

Police spokeswoman Hollie-Marie Bone said: “Any report of race hate crime is taken very seriously and will always be investigated thoroughly. We are working hard to ensure victims of race hate crime have the confidence to come forward and report incidents to us. Better partnership working with organisations such as SARI and other agencies has led to an increase in reporting of hate crime.”

Kelly believes councils should encourage more racial integration in terms of where people live and would like to see those punished at court for racist crimes to be ordered to work in the community of the person they offended against, to “break down the barriers of racism”. She also urges people to always report incidents to the police or organisations like SARI (Stand Against Racism and Inequality).

Update:  Members of the English Defence League have been posting their thoughts on the report: