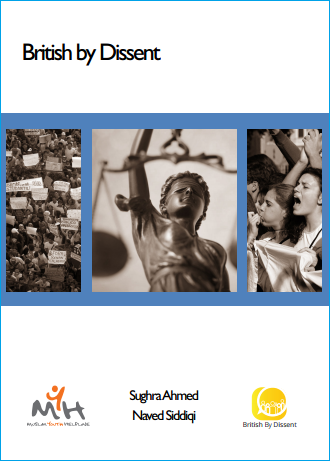 Stand up and be counted: Young British Muslims are voicing their dissent, and that’s a good thing

The Muslim Youth Helpline (MYH) has today published a new report, British by Dissent, which explores the meaning of dissent to young British Muslims keeping in mind the underlying question of their integration within the larger British society.

Authored by Sughra Ahmed and Naved Siddiqi, it takes a look at how young British Muslims respond to social, economic, religious and public policy debates through various manifestations of dissent.

The report covers various themes, including:

A discussion on the history of dissent in Britain as well as the development of Muslim organisations and Muslim faith based activism in the UK places the current research in its context.

Some key findings of the report are:

The report has found young Muslims increasingly active in participating in dissent and activism, but points out this should not be seen as ‘un-British’ or harmful to integration, but rather its opposite. Young British Muslims are channelling passion and energy towards more mainstream issues, seeing their engagement as a healthy and responsible thing in society. However many young Muslims feel that while they are constructively engaged thus,  this is not appreciated or even acknowledged in a positive sense by the government, Muslim institutions and the media.. Society is confusing dissent with disaffection and this runs counter to positive social inclusion.

‘Islamic identity is so often taken in public discussion in this country as a clear instance of the way in which religious conviction is a social problem, a source of division or alienation. What we see in this excellent and intelligent piece of research is a very different picture, which gives grounds for much hope – for younger British Muslims, but also for wider British society if it is willing and able to receive the gifts it is being offered.’

The report will be delivered to policy-makers and includes several recommendations – including the recommendation that Educational institutions should help create safe spaces for the exploration of dissent by young Muslims and that theGovernment and civil society (including Muslim institutions) should work in partnership to provide better training resources that can enhance the ability of young Muslims to contribute to mainstream causes and the wider social good.