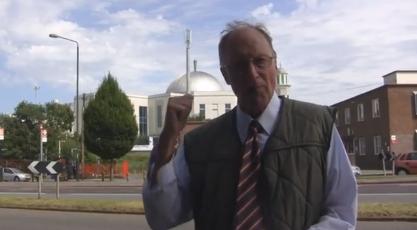 Richard Edmonds in front of the Baitul Futuh Mosque in Morden

No doubt flushed with the “success” of its recent protest at the site of a proposed mosque in Sunderland, the National Front has belatedly latched on to the plan to convert a vacant building in Worcester Park in South London into an Islamic centre, which has already been the subject of local opposition.

The NF reports that fully seven of its supporters (probably almost the entire London membership) leafleted the area on Saturday in order to warn the non-Muslim population of Sutton of the fate that awaits them if the conversion goes ahead. The NF contingent was headed by veteran neo-Nazi Richard Edmonds (who, you may recall, has served as an inspiration to English Defence League leader Stephen Lennon).

In an accompanying video filmed in front of the mosque’s intended premises Edmonds declares: “The locals are absolutely correct to oppose this proposal. A mosque located here, close to the centre of the town, would change the character of Worcester Park irrevocably, and would be the thin edge of the alien wedge Enoch Powell warned us against.”

Edmonds then announces dramatically: “We will now show you what the townsfolk can expect if planning permission is granted. Let the good folk of Worcester Park and elsewhere take heed.”

The video then shifts to Edmonds gesticulating in front of the Baitul Futuh Mosque at Morden in the neighbouring South London borough of Merton. Possibly the largest mosque in western Europe, the complex serves as the UK headquarters of the Ahmadiyya Muslim Community. It covers an area of 5.2 acres and can hold up to 10,000 worshippers.

If you consult the Planning & Design and Access Statement submitted to the London Borough of Sutton in support of the Worcester Park proposal, you’ll find the following: “It is expected that maximum 10-15 persons will attend for any one prayer session on a daily basis. Occasionally, the building can accommodate up to its maximum capacity of 140 persons.”

So the parallel Edmonds wishes to draw is, shall we say, just ever so slightly exaggerated.

Denouncing the earlier decision to allow the Baitul Futuh Mosque planning permission, Edmonds announces portentously: “This country is Great Britain. It is not Saudi Arabia.” Indeed it isn’t, and if Edmonds requires confirmation of this he might like to investigate how the Saudi monarchy would respond to a request to build an Ahmadiyya mosque there. Britain, by contrast, is a society where, despite the best efforts of Edmonds and his kind, all major faiths have the right to build places of worship free from state oppression. Edmonds clearly has more in common with the Saudi Wahhabi regime than he realises.

Meanwhile, we have pleasure in reporting some bad news for Edmonds and the NF leadership (via Expose). It appears that the North East National Front, who organised the protest against the proposed Sunderland mosque, have now split from the parent body, citing objections to “red tape and false dictators telling us what can and cant be done”, and have formed a new organisation, the Northern Patriotic Front.