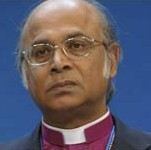 Muslims were accused of being “in denial” by the senior Christian bishop accused of inflaming anti-Islamic feeling by declaring extremists have made parts of Britain “no go areas” for non-Muslims.

Bishop of Rochester, Dr Michael Nazir Ali, defended himself against a barrage of criticism at an inter-faith meeting at Ilford Islamic Centre on Friday. Organised by the East London Three Faiths Forum, about 200 people packed into the Albert Road, Ilford, centre.

One Muslim man said after the “no go” comments hit the news his family was targeted. He said: “Surely you must have known there would be this tremendous backlash, our windows broken, our sisters and wives spat at?”

Assistant imam of the South Woodford Muslim Community Centre and Mosque, Abdulrahman Tejan Bangura, fumed: “How many times do the wider community need to be educated about the fact that extremism is un-Islamic? Anyone that’s practising extremism is not a Muslim.”

Dr Nazir Ali said: “The fact of the matter is that extremists who call themselves Islamic extremists, whether they should attach themselves to that name or not is not for me to judge, have made it so difficult for Christian workers in particular places even to live. Christian clergy have been prevented from distributing literature in people’s homes, Christian workers have been attacked or intimidated. I think the Muslim community and wider community both, need to attend to this situation and address it, rather than being in denial.”