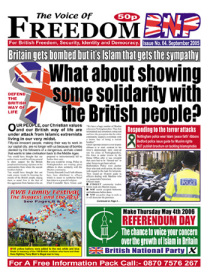 The fascists have picked up on the leaked Pentagon briefing paper warning of the Islamic threat to western civilisation:

“As the Pentagon finally sees the light, and has now begun to view the religion of Islam for what it is, when defining strategic plans in the War on Terror, will the New Labour government follow suit? Of course not. The pandering to the Muslim minority in Britain will continue. The British people, in four years time will have to face the indomitable truth. That truth is a simple choice – do we, as a once proud people lie down and accept foreign rule from a medieval and barbaric religion or should we make a stand? Should we fight to win against the forces of Jihad? Should we try and win back our country from those that would steal it from us?”