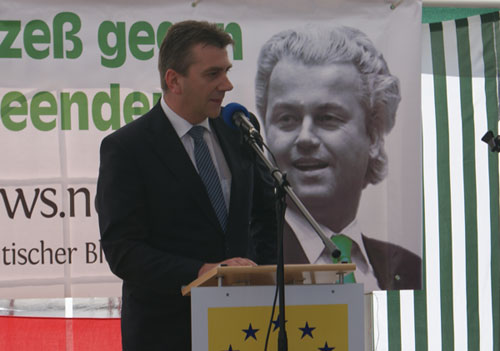 The leader of a newly created anti-Islamic party in Germany said he wants to stop the immigration of Muslims and described Islam as a “totalitarian system” bent on supplanting western liberal values.

In an interview with The National, Rene Stadtkewitz, 46, said Muslims were not integrating into German society as well as other immigrants and that authorities should become stricter, by banning headscarves in school, stopping public funding for teaching young children the Quran and curbing the influence of Islamic organisations.

“Islam is far more than a religion. It’s an entire model of society that is incredibly binding for many people,” he said. “It’s basically a political system with its own legal system that seeks to regulate all aspects of life. We criticise the socio-political component of Islam, which I see as an ideological one similar to other totalitarian systems, and which I think is dangerous.”

He called Islam “the opposite of a free society” and said the faith posed a threat because it sought to instil different values in Germany, and because it encouraged immigrants to segregate themselves.

Mr Stadtkewitz, a former member of Chancellor Angela Merkel’s conservative Christian Democratic Union (CDU), set up his party, Freedom, last October. He had been expelled from the CDU’s parliamentary group in the Berlin city assembly for inviting Geert Wilders, the controversial Dutch Islam critic and head of the Party for Freedom, to Berlin for a conference.

Mr Stadtkewitz said his party now had 1,400 members and was setting up regional branches across Germany. It plans to contest its first election in September when Berlin votes for a new mayor and city parliament. Mr Stadtkewitz said the aim was to cross the 5 per cent threshold needed to obtain seats in the assembly. “If that goes well, we’ll prepare for the general election in 2013,” he said.

He wants a temporary halt to immigration and favours introducing Swiss-style referendums in Germany. He said he would not stand in the way of a public vote on banning the construction of minarets, as Switzerland did in 2009, although he saw such a move as just “scratching at the surface” of the problem.

Mr Stadtkewitz denied accusations that he was a far-right populist. He said his party was espousing mainstream views about Islam and was part of an “uprising” by people across Europe against growing Islamic influence. “Anyone who criticises Islam stands in the centre of society,” he said. “Islam is becoming more visible in western countries and people are starting to rise up against that.”

Outside of Germany, it may be recalled, one of the Freedom Party’s most prominent supporters is Daniel Pipes.