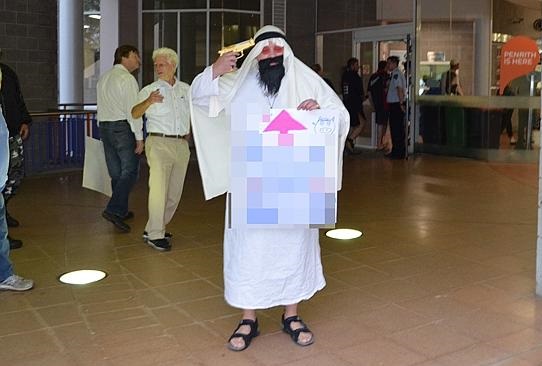 Penrith Council has voted to continue its development approval for an Islamic prayer centre in Kemps Creek.

A motion to rescind approval granted on October 27 was defeated seven votes to four. The proposal is subject to special conditions.

A man was stopped from attending the meeting by police when he arrived at the council chambers dressed to imitate an Arab sheik. The middle-aged man was wearing a headdress and sandals, and was waving around a toy pistol.

He was part of a protest organised by members of the Australia First Party outside the council offices as people gathered to attend the special meeting.

Australia First Party candidate for Penrith Victor Waterson said the mosque would only cause problems in the Penrith community.

“There will be crime problems, transport difficulties, issues with land prices and a high degree of cultural separation, mistrust and possible violence,” Mr Waterson said. “The council must stand firm and reject the application.”

The rescission motion failed and the previous recommendation stands that the DA be granted consent subject to special conditions.