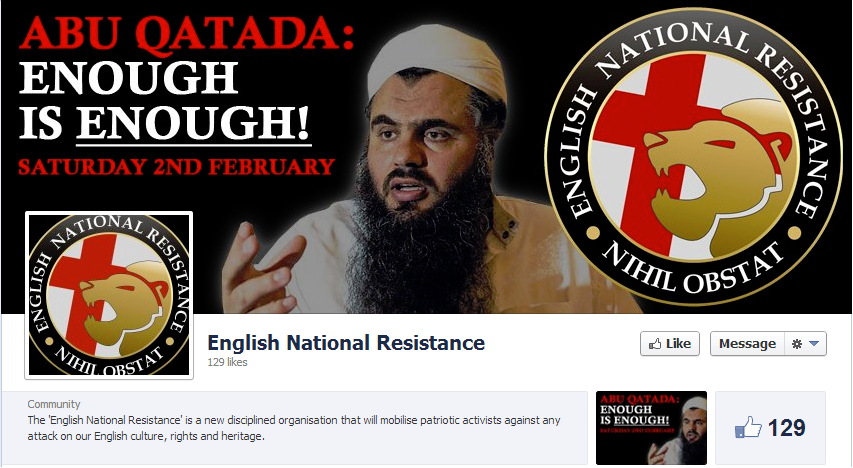 You may recall that Britain First, a far-right groupuscule headed by former BNPers Jim Dowson and Paul Golding, organised a unity meeting in Dartford last month to discuss plans for a new anti-Islam street protest movement to replace the declining and fragmenting English Defence League.

The protest movement has now been formally launched. It’s called the English National Resistance and describes itself as a “new disciplined organisation that will mobilise patriotic activists against any attack on our English culture, rights and heritage”.

As is the way with such things, the English National Resistance presents itself as a far-right unity initiative, claiming to have brought together “a multitude of different existing patriotic groups”. So far, however, it would appear to be little more than a Britain First front organisation.

The ENR’s first event is scheduled for tomorrow, 2 February, with a planned march through Stanmore to the house of Abu Qatada. Whether it will in fact take place is as yet unclear, as Qatada’s lawyers have applied to the High Court for an injunction to prevent the demonstration going ahead.

Given that the protest is likely to attract a derisory number of participants, the BF/ENR leaders are probably hoping that the injunction is granted. That way they can milk the situation for the maximum publicity – High Court sides with Muslim terrorist and deprives decent British patriots of right to free speech, you know the sort of thing – while avoiding the public exposure of the minuscule forces they actually represent.

Update:  The court has granted Abu Qatada and his family a temporary injunction against the English National Resistance, Britain First, English Defence League, South East Alliance, English Democrats and March for England. The relevant section of the judgement reads:

Until the conclusion of a hearing which shall be listed on the first available date after 15 February 2013 each Defendant must not:

For the ENR’s response, see here and here.