A UKIP councillor has been embroiled in a row over homophobic and racist comments just hours after being elected.

Dave Small won the Church Hill seat for the party on Redditch Borough Council on Friday (May 23). But just minutes later it emerged a posting had been made on his Facebook page on June 3 last year in which homosexual people are branded perverts including musician Sir Elton John and sports presenter Clare Balding OBE.

“I refuse to call them gays, as what has gay to do with Perverts like Elton John and Clair [sic] Balding who get their jollies in such disgusting ways. to sum up, they should not allowed to be married, they should go back to the closet,” it said.

A previous post in February last year also states the best place for gay people is in the closet.

Another note on the wall under the headline ‘Muslims and the threat they pose to our way of life’ states: “Fact, we had most eradicated T.B from this country, then with the migration for Muslim country’s its near epidemic proportions. But mustn’t say anything, it might be considered racist.”

It is not known if Mr Small made the postings himself or if they were posted on his behalf but they are either signed by Dave Small or posted as a status from him.

When the Standard pointed out the postings to Len Harris, acting chairman of the Redditch branch of UKIP, he said he could not be sure it was Mr Small and pledged to carry out an investigation. “I’ve never heard of this. We as a party will not tolerate that kind of language and disciplinary action will be taken.” The Standard has been unable to contact Mr Small for comment.

It is not the first time the issue of homosexuality has caused problems for UKIP. A month ago Martin Jenkins resigned from the party and quit his seat Arrow Valley East seat on Worcestershire County Council in protest at UKIP’s stance on gay marriage.

Labour councillor Joe Baker, who represents Church Hill on Worcestershire County Council and is openly gay, said: “I don’t think the word pervert and gay goes in the same kind of content in the dictionary. He should resign for making comments like gay people are perverts. We’ve all go to show each other respect no matter what gender, sexuality or race.”

UKIP councillor Stuart Cross, who represents Redditch South on Worcestershire County Council, added: “If he has said that, then it is utterly disgraceful and he needs to immediately resign. There is no place for people like that either with UKIP or as a councillor.”

Here are some more thoughts from Councillor Small on the subject of Muslims (or, as he would prefer, “Paki’s”): 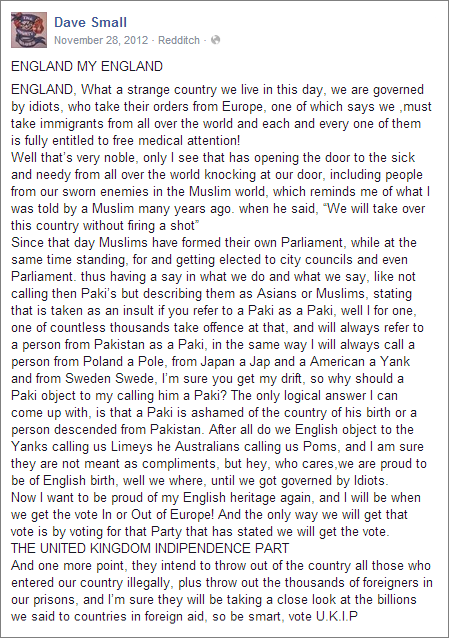 It is sometimes argued that UKIP’s supporters should not be treated as bigots but understood rather as people who are merely alienated from mainstream politics. As Councillor Small demonstrates, ignorant bigotry is not necessarily separate from disillusionment with the existing political system – in fact the one often fuels the other: 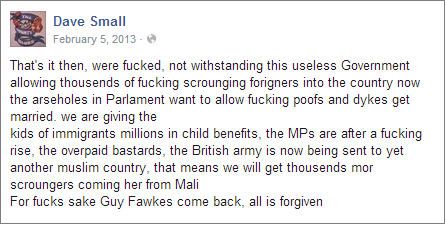