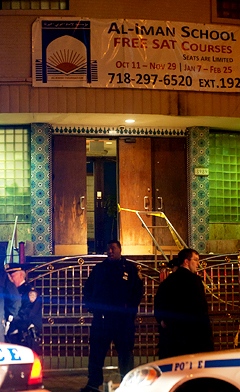 Cops are investigating a rash of Molotov cocktail attacks in Queens late Sunday, including one on an Islamic mosque and another that set off a major house fire. Police are handling the four bottle-bombings as possible hate crimes, officials said.

The homemade explosives were hurled at a bodega, the Imam Al-Khoei Islamic Center in Jamaica and two homes between 8 p.m. and 10:15 p.m., cops said. All of the targets were in Jamaica, within two miles of each other, police said. “They definitely appear to be quite similar,” a police source said, “We’re looking into them as bias crimes.”

Up to 80 people were at the Islamic center at 89-89 Van Wyck Expressway about 9 p.m. when someone threw two or three Molotov cocktails at the building’s brick facade, witnesses said. “We had a few members downstairs and they heard it. We came out and put out the fire and called 911,” said Maan Lasahlan, the center’s minister of religion.

Ali Rizdi, who attends the mosque, said he ran outside and began stomping out the fire. He said one of the gas bombs was fashioned from a glass Starbucks Frappuccino bottle. “We are shocked,” Rizdi said. “We live in the U.S. This is our country.”

Meanwhile, the Bare Naked Islam blog, which had reportedly been taken down by WordPress after inciting violence against Muslims, is back online – applauding attacks on mosques.

And “CAIR points to anti-Muslim postings in wake of mosque attacks”, TPM, 2 January 2011