Visit The New York Times‘ homepage today, and before the page loads you may be shown a 15-second full-screen advertisement warning that unnamed “Islamist groups” are “undermining America’s security, liberty, and free speech,” with a photo of the World Trade Center towers.

The ad’s implicitly Islamophobic message, suggesting that Muslim-Americans may be enemies within, and its timing during the opening of the September 11 Memorial Museum, raise questions about why the Times decided to allow it such prominent display on its homepage. The advertising unit, called an interstitial, is typically one of the most expensive because it required users to view the ad or click away before they can see the New York Times homepage.

A spokesperson for the Times, asked why the ad was permitted under the company’s policy against ads that are gratuitously offensive on racial, religious, or ethnic grounds, responded that the ad had been internally reviewed and approved. The spokesperson added that the company had decided to slightly alter the ad’s wording. “However upon reexamination, we think the phrase ‘radical Islamists’ would have been better than ‘Islamists’ in this advertisement,” she explained. “The advertiser agreed to the change and the ad has been updated on nytimes.com.”

The ad is sponsored by a group called the Investigative Project on Terrorism, which says it researches “radical Islamist terror groups,” but in practice primarily argues that mainstream Muslim-Americans and Muslim-American groups are secretly terrorists who are plotting against the US.

Here is the ad as it appeared when attempting to load NYTimes.com: 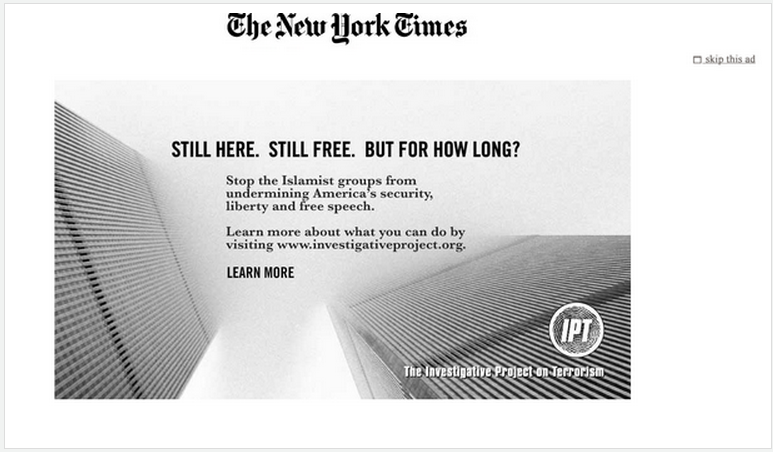 The group also purchased a full-page display ad in Wednesday’s print edition New York Times. The all-text ad opened by “commemorating today’s official opening of the National September 11 Memorial Museum.” It went on to warn at great length that mainstream Muslim-American groups such as the Council on American-Islamic Relations were in fact part of a clandestine “radical Islamist” vanguard of a “holy war” that supports terrorism and wishes to continue the efforts of the September 11 attacks. “This is the new form of the jihadist threat we face,” the ad reads.

The Investigative Project on Terrorism has long been criticized as Islamophobic for its campaign against what it describes as a clandestine effort by “radical Muslims” – which they allege includes mainstream rights groups – to infiltrate and destroy the United States from within. The group was founded in 1995 by Steven Emerson, whose 2002 book is titled “American Jihad: The Terrorists Living Among Us.”

Emerson has a reputation for campaigning against Muslim-American groups and for paranoia; a 2002 story reported that he often required visitors to his office to wear a blindfold. Former CIA counterterrorism director Vincent Cannistraro said of him, “He’s trying to say people who move to this country and set up charities and think tanks and are associated with Hamas and Islamic Jihad and Hezbollah, that there’s some kind of connection between them and Sept. 11, that there’s a liaison or support network. He doesn’t know what he’s talking about.”

A Times spokesperson told Digiday, “The ad was reviewed internally and complies with our policy on advocacy ads.” The company’s policy, copied below, prohibits ads that are “gratuitously offensive on racial, religious or ethnic grounds.”

We believe that the broad principles of freedom of the press confer on us an obligation to keep our advertising columns open to all points of view. Therefore, The New York Times accepts advertisements in which groups or individuals comment on public or controversial issues. We make no judgments on an advertiser’s arguments, factual assertions or conclusions. We accept advocacy/opinion advertisements regardless of our editorial position on any given subject.

We do not, however, accept advocacy advertisements that are attacks of a personal nature, that seek to comment on private disputes or that contain vulgar or indecent language.

We do not accept advertisements that are gratuitously offensive on racial, religious or ethnic grounds or that are considered to be in poor taste. We do not verify, nor do we vouch for, statements of purported fact in advocacy/opinion advertisements. We reserve the right, however, to require documentation of factual claims when it is deemed necessary.

And Raya Jalabi, “Why would the New York Times stoop to running an Islamophobe’s ad?”, Guardian, 23 May 2014