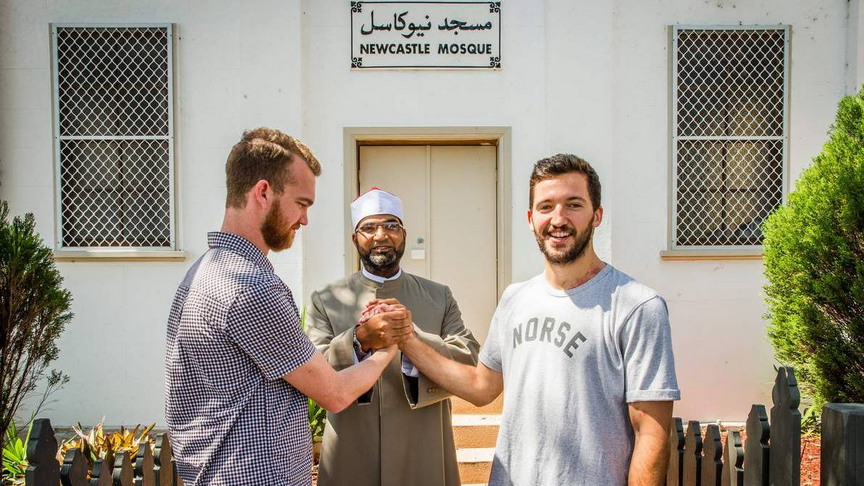 The men who took a stand against an alleged act of bigotry last week in Newcastle have been formally thanked by members of the city’s Muslim association.

Patrick Burgess and Justin Lanz visited Newcastle Mosque on Saturday where they were also invited to a community open day that will be held at the mosque, which is located in Wallsend, this upcoming Sunday from 10am to 3pm.

The men were skating with four other friends last Monday when they came to the aid of a Muslim mother and daughter who were being attacked in an alleged bigoted tirade on Smith Street, in Newcastle West.

The incident occurred at a time of increasing community unrest and concern Australia’s mission against Islamic State in Iraq is fuelling attacks on Muslims in Australia. On Saturday a man was charged for allegedly shouting offensive comments and throwing cement bags at a mosque in Sydney’s south-west.

Newcastle Muslim Association vice-president Diana Rah said the group’s “quick response” was appreciated. “It took a lot of courage to do what they did,” she said. “We will be giving them a certificate on Wednesday when all six of them can visit us.

“For the open day we’re having a sausage sizzle, we’ve got an exhibition on Islam and Muslims and we’ve got a lot of different fun things planned. Everyone is invited; it’s about people getting to know us and us them.”

Mr Burgess said they had really enjoyed meeting everyone at the mosque, which is on Metcalfe Street. “We were just doing what any normal person would do,” he said of the group’s role in helping stop the attack.

Mr Burgess said that they had received a lot of support and kind messages from people after speaking to the Newcastle Herald last week. “I think it shows the majority of people in the community are good and that the extremists who are doing these attacks are in the minority,” he said.

The fact the most Australians do not tolerate Islamophobia has been highlighted in a video called The Social Experiment, which was posted on Youtube by the Macquarie University Muslim Students Association, based in Sydney. Watch it here.

The video shows an actor abusing Muslim people in public and in every scene a passerby steps in to defend against the bigoted attacks. The director of the video, Kamal Saleh, described the results as “amazing” and “inspirational”.