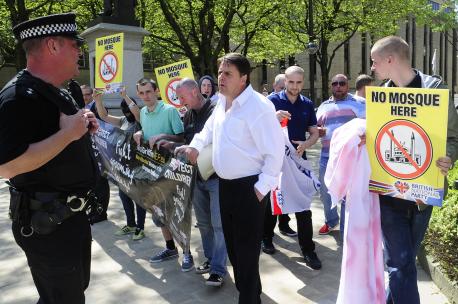 Nick Griffin and members of the British National Party held a controversial protest in Victoria Square against plans to build a new mosque in Farnworth.

About 20 supporters of the far-right nationalist party protested on Saturday afternoon, against Bolton planning committee’s decision on May 1 to allow the Sugrha Mosque in Granville Street to be knocked down to make way for a new one.

Some Bolton residents who walked past the protesters opposed their view and backed the committee’s decision. And Bolton Council bosses insisted the application went through exactly the same process as any other.

Mr Griffin appeared to suggest town-hall bosses should have asked everyone in Bolton for their views, rather than just immediate neighbours. However, anyone is able to support, object to, or comment on any proposal, regardless of where they live.

Mr Griffin said: “We are trying to raise awareness of the way the council is pushing through the application for this mosque without full consultation. People in Bolton think they are voting for a council which speaks for the working classes, but it gave up on that years ago. Bolton people have responded to our campaign very well. They are supportive and open-minded.”

BNP activist Bryn Morgan added: “The Sughra mosque looks like something from the Middle East. One of Bolton Council’s planning officers has even said it will have a drastic impact on the community in terms of parking, lighting and road congestion.

“There seems to be a lot of underhand tactics on the council’s part that we are highlighting today. Bolton Council hasn’t consulted with the town’s people over the building of this mosque – no one knew anything about it. They should be doing more to publicise it.”

Tensions threatened to spill over when one man reacted angrily to the party’s protest, which resulted in himself and a BNP supporter being escorted away by police. As Mr Griffin and members of the BNP walked back to their bus after the demonstration, they were heckled by Liz Perry, who labelled the party “scum”.

Ms Perry, aged 60, of Bradshaw, said: “I came down with a group of friends and we are absolutely disgusted that Nick Griffin has had the nerve to appear in our town. We are a multicultural town and for him to come here is appalling. He has no right to protest against what people in Bolton want.

“I want the mosque to be built and I know plenty of other people who do. What’s the mosque doing wrong? All they are doing is inciting unnecessary racial hatred.”

The council’s environmental services representative, Cllr Nick Peel said: ““It is nonsense to suggest that, because a planning application is for a mosque, we should therefore consult with the wider public – we consult with the immediately affected neighbours as a statutory requirement.

“This application has only received particular attention because it’s a mosque. There’s a new church being built in Chorley New Road and this hasn’t sparked off a protest.

“I think people can see through the BNP front and see what they really represent, which is bigotry and hatred of people who are in any way different, in terms of race and religion.”

See also “Call for ‘Muzzer blood’ to be spilled over plan to rebuild Farnworth mosque”, Islamophobia Watch, 14 May 2014