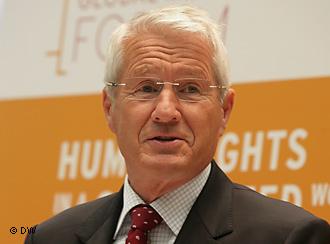 Europe’s leaders, including David Cameron, have been warned to adopt a more “cautious” approach when discussing multiculturalism. The Norwegian chairman of the Nobel peace prize committee has told them they risk inflaming far-right and anti-Muslim sentiment.

Thorbjørn Jagland, a former prime minister of his country, said leaders such as the British premier would be “playing with fire” if they continued to use rhetoric that could be exploited by extremists.

Four months ago in Munich, Cameron declared that state multiculturalism had failed in Britain, a view immediately praised by Nick Griffin, leader of the BNP, as “a further huge leap for our ideas into the political mainstream”. Marine Le Pen, vice-president of the far-right National Front party in France, also endorsed Cameron’s view of multiculturalism, claiming that it corroborated her own party’s line.

Jagland, who is also secretary general of the Council of Europe, told the Observer:

“We have to be very careful how we are discussing these issues, what words are used. Political leaders have got to defend the fact that society has become more diverse. We have to defend the reality, otherwise we are going to get into a mess. I think political leaders have to send a clear message to embrace it and benefit from it. We should be very cautious now, we should not play with fire. Therefore I think the words we are using are very important because it can lead to much more.”

Jagland’s warning is to be welcomed. However, it has to be said that he hasn’t always taken this line. Back in February he gave an interview to the Financial Times who reported:

“Mr Jagland came to the defence of Angela Merkel, the German chancellor, David Cameron, UK prime minister, and Nicolas Sarkozy, French president, who have all warned recently that the tradition of encouraging diverse cultures to live side-by-side has damaged national identity and helped to promote the radicalisation of immigrant youth.”

The FT quoted Jagland as saying: “As we understand it now, multiculturalism allows parallel societies to develop within states. This must be stopped. It is also clear that some parallel societies have developed radical ideas that are dangerous. Terrorism cannot be accepted.”