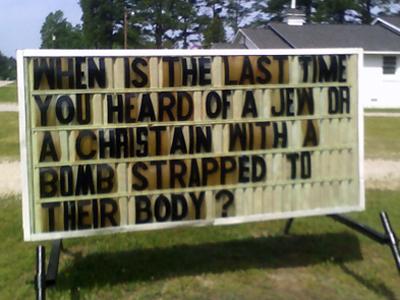 Words like “bomb” and “die” draw attention to the small sign in front of Good News Independent Baptist Church.

Rev. Gary Murrell put up the sign, which on one side claims the message of Islam is “submit, convert or die.” The other side reads: “When is the last time you heard of a Jew or Christian with a bomb strapped to their body?”

Despite some in the Islamic community who claim the sign is offensive, Murrell says it is not a hate sign. “It was not put up there with the purpose of showing that we hate those people,” he said. “It’s not the people, it’s the religion.”

Murrell says it is a violent religion compared to Christianity. But not everyone agrees.

“It’s sad to see that we still have this kind of ignorance in the community about the Islamic faith,” she added. Murrell says he is trying to make people think but Jaunich said she thinks it breeds discrimination and bigotry.

“The point is that their salvation is in Jesus Christ, not in the Islamic faith,” Murrell said. “I am not trying to be a bigot. I’m not. I don’t hate those people.”

Murrell says the sign has been up for about a week and that he plans to change it this weekend.

But discussion about the message will likely continue. The Islamic Center of Raleigh is inviting Murrell and his congregation for a visit to learn more about Islam. 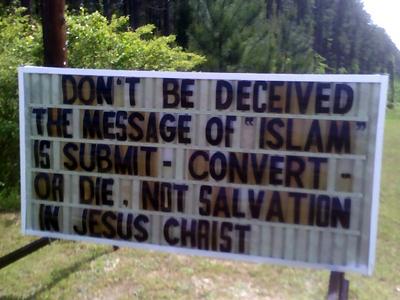