The Norwegian Defence League (NDL) has published a list of hundreds of Muslim companies and organizations on its website. The list had been compiled on the basis of listings in the Public Entity Registry. Lars Johnny Aardal, deputy leader of the NDL, said that it was published “to show the extent of Islam and Muslims in Norway”.

Senior scientist at the Norwegian Center for Studies of Holocaust and Religious Minorities, Terje Emberland, told VG that such a list had only been made once before in Norway, when an anti-semite in the 1930s published a list of Jewish businesses in Norway. He also said that “In this way, the NDL clearly exposes its character, and aligns with the fascist and racist tradition to which it belongs.”

Following the 2011 Norway attacks on 22 July, it was revealed that the admitted terrorist Anders Behring Breivik had formerly been a member of the NDL. Breivik has been identified as a member of the NDL under the pseudonym “Sigurd Jorsalfar” (after the medieval Norwegian crusader-king Sigurd the Crusader).

The first documented initiative for establishing a Norwegian sister organization to the EDL had also originated in a forum post by Breivik on the Norwegian website Document.no on December 6, 2009. There Breivik proposes to establish a Norwegian version of the English Defence League. 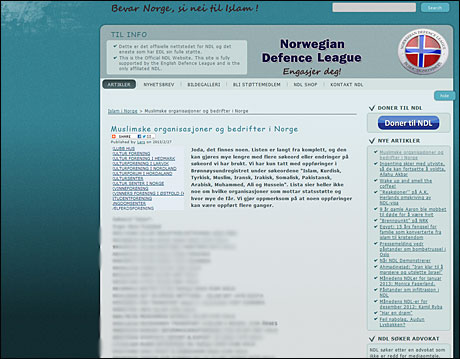