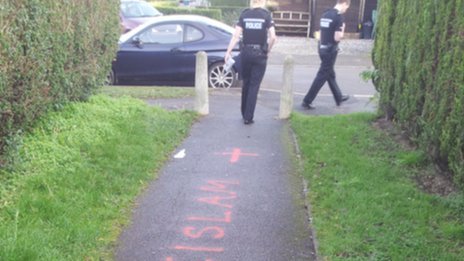 Offensive graffiti attacking Allah and Islam has been painted outside a Muslim family’s home weeks after a cross wrapped in ham was left by their door.

The 31-year-old mother and two sons, eight and 10, say they have suffered five or six racist incidents since they moved to Bingham, Notts, in October.

The graffiti was painted on their path on Saturday morning.

A 13-year-old Bingham boy was arrested in connection with the ham-covered cross on Friday and bailed.

The family, who do not want to be identified, moved to the Nottinghamshire market town after the mother separated from her husband.

The husband said he had now had to move in with his family to protect them.

“They are in fear of their lives,” he said. “My kids are scared and crying. Two days after the first incident I saw the eldest on the laptop looking at a map, looking for escape routes in case anything goes wrong.”

“Clearly they are targeting my wife. I’ve got to assume it’s because of the way she dresses in traditional Asian clothes, with a traditional headdress.”