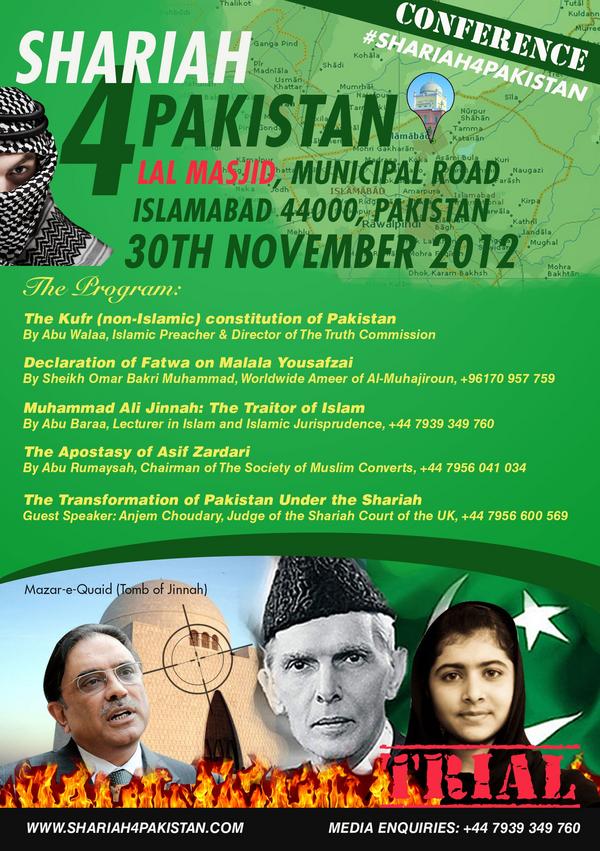 Earlier this month Anjem Choudary announced his latest publicity stunt – a conference at the Lal Masjid in Islamabad on 30 November, where fatwas would be issued against Pakistan’s founder Muhammad Ali Jinnah, its current president Asif Zardari, and Malala Yousafzai, the young woman shot by the Tehrik-i-Taliban Pakistan last month.

Choudary of course has a long history of announcing provocative plans that he has no intention of actually carrying through, and then, having milked the resulting outrage for all the publicity he can, calling them off at the last minute. These non-events have included a March for Shari’ah in London in 2009, a demonstration at Wootton Bassett in 2010 where his followers were to carry 500 coffins to symbolise the deaths of Muslims in Iraq and Afghanistan, a rally outside the White House the same year to advocate sharia law in the US, and a protest against the royal wedding in April 2011. So nobody had any excuse for falling for Choudary’s latest con-trick.

If any confirmation was required that Choudary’s Islamabad conference was a fraud, on 21 November the London correspondent of The News reported that a representative of Lal Masjid had contacted the paper to insist that they had never even spoken to Choudary or his organisation and knew of no proposal to hold a conference at the mosque on 30 November. The spokesman emphasised that “Maulana Abdul Aziz and the whole mosque administration condemn the inflammatory statements used by this group, clearly seeking publicity”.

It was hardly unexpected, therefore, that earlier this week Choudary should issue a press release stating that the conference had been “postponed”. In a statement to The News, Choudary cited as one of the reasons for this decision “the refusal of the apostate Pakistani regime to issue visas to key speakers”. However, the paper reported that he and his supporters “never applied for Pakistani visas” in the first place.

This entirely predictable outcome didn’t prevent certain interested parties from treating Choudary’s Lal Masjid conference as if it was a serious proposal. In response to the initial announcement of the event, Maajid Nawaaz of Quilliam demanded indignantly “We gonna let this happen??” On 18 November, in an article that was considered sufficiently important to be advertised on its front page as an “exclusive”, the Daily Star Sunday informed its readers: “British-based Muslim extremists want the schoolgirl shot by the Taliban to face a possible death sentence. The radicals will head to the Pakistani capital of Islamabad to link up with hardliners for a demonstration urging a fatwa against Malala Yousafzai.”

The Spectator for its part ran a piece by Shiraz Maher which similarly accepted the announcement of the Islamabad conference as good coin, and went on to suggest that Choudary – a British citizen – should be prevented from re-entering the UK when he came back from Pakistan. The article, headlined “Few would shed tears if Britain barred Anjem Choudary from returning”, appeared on 27 November – the same day that Choudary revealed that he had in fact no intention of going. Maher’s stupid article was reproduced with evident approval by the anti-racist organisation Hope Not Hate.

Will this latest nonsense from Anjem Choudary lead to commentators taking a more sceptical view of his next provocation? It’s highly unlikely, unfortunately. Whether it’s the Islamophobic right-wing press or “experts” like Maajid Nawaz and Shiraz Maher who have built careers out of exaggerating and misrepresenting the threat of “Islamist extremism”, there are plenty of people who have a vested interest in promoting Choudary and his minuscule group of nutters as if they represent a significant trend within the British Muslim community.