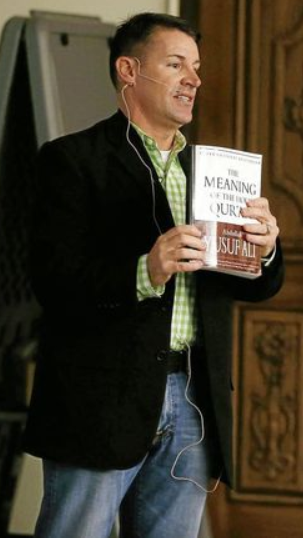 If it wasn’t clear already, it should be now. State Rep. John Bennett, R-Sallisaw, is not going to back down on his criticism of Muslims and the Council on American-Islamic Relations.

Speaking to about 25 members of the Muskogee Patriot Group at the town’s public library on Thursday, Bennett doubled down on statements he’s made that have garnered national attention in the last few weeks, covering a variety of topics but saving some especially vicious vitriol for CAIR.

Bennett told the tea party group that there’s “no difference between moderate Islam and extreme Islam” and said CAIR might have been lying to promote its pro-Muslim agenda when it denounced the actions of Alton Nolen, who is accused of beheading a woman in Moore last week.

CAIR’s and other Islamic groups’ denouncements of the beheading were acts of subversion, Bennett said. He showed attendees seven Quran verses he said he believes authorize Muslims to lie to nonbelievers if it promotes the “Muslim agenda.”

“They condemn acts against the innocent,” Bennett said. “(That’s the) key word. You’ve got to read between the lines. ‘Innocents’ are only those following Islam.”

Bennett was met with sharp criticism when his statements – calling Islam a cancer that needs to be cut out of America – were first broadcast in September. But he was also met with some support.

Oklahoma Republican Party Chairman Dave Weston supported Bennett following the statements, and it was clear from his town hall meeting in Sallisaw last month as well as at Thursday’s meeting that Bennett’s message is one that resonates with some Oklahomans.

Bennett didn’t shy away from inflammatory comments Thursday. He said the “silent majority” of Muslims who have not commented on the beheading in Moore, as well as the terrorist acts of the Islamic State group, or ISIL, are “just like Germans” who joined the Nazis when the Nazis came into power. He said the “liberal media” was the No. 1 problem when it came to stopping the growth of Islam in America, and he said “limp-wristed liberal apologists” also have played a part in Islam’s rise here.

He said he received death threats following a post that Adam Soltani, the executive director of Oklahoma’s CAIR chapter, made on Facebook. Soltani posted a picture of himself sitting at Bennett’s desk on Sept. 16, saying, “I don’t think State Representative John Bennett would be happy with me sitting at his desk.” Soltani said Thursday night in a telephone interview that he took the picture in 2013 after he had heard of Bennett’s anti-Muslim sentiment.

“This is not me taking away their freedom of religion,” Bennett said of his efforts to quell Islam’s growth. “They can have their religion. … But when their religion tells them to cut off the heads of nonbelievers, … we need to stop the spread.”

But Bennett faced some negative reaction from the attendees Thursday. One woman got into an extended argument with Bennett, asking him what his plan was “to cut out the cancer” of Islam.

Bennett told her – and another woman who asked him how people can protect themselves from violence while not impeding the rights of Muslims – that education and open dialogue are the key. “I’m not saying to burn down a mosque or round them all up,” Bennett said. “When I say cut out the cancer, I’m not saying go out and kill these people.”

Another man stood and called Bennett a “fearmongerer” who had found a niche in rallying people against Muslims. He told Bennett that many of the slides he showed during his presentation could have had the word “Muslim” replaced with the word “Christian” and still been accurate. “Christianity doesn’t teach us to cut the heads off those who disagree with us,” Bennett responded.

Many there agreed with Bennett’s message. They cheered when he told them to “stand for Jesus” and were clearly thrilled to have the outspoken representative among them.

To applause, he told them he would not back down or change his beliefs when it came to the religion. “I won’t back down,” he said. “But at the same time, I do not condone any violence toward Muslims at all. … They need Jesus. … But I will not tolerate something like Islam to come into the United States.”