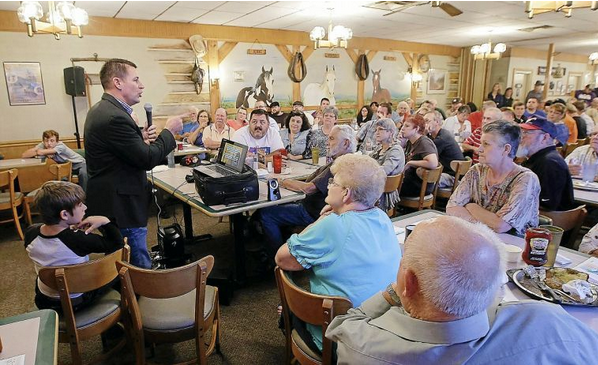 State Rep. John Bennett, R-Sallisaw, meeting Monday night with about 85 constituents at a Republican gathering at Western Sizzlin’ here, did not back down from statements he made earlier this month that were critical of Islam.

Bennett has been at the center of a political maelstrom that has gained national attention since he published comments on social media warning people to be wary of Muslim Americans and then refused to apologize in the face of mounting criticism.

Asked before the meeting whether he planned to apologize for his comments, Bennett said, “No. Because I’m right, and they know I’m right.”

“CAIR (Council on American-Islamic Relations) used political pressure to make me back down, but I didn’t and I’m not going to,” he said to a standing ovation. Bennett, who served in the U.S. Marines in Iraq and Afghanistan, said he has heard from people all over the world supporting his position.

In a lengthy presentation that included videos made within U.S. mosques, Bennett outlined a history of the Islamic faith and his views that Islam is a sociopolitical movement intent upon destruction of Western civilization and world domination. “Their goal is the destruction of Western civilization from within,” he said. “This is a cancer in our nation that needs to be cut out.”

“The media is playing right into their hands,” he said. “We need to share his (Jesus’) story, love others and stand for freedom,” he said to loud applause. I love each and every one of them, but I’m not going to stand back and let them push Islam into our nation.”

He said the FBI has severed ties with CAIR in part because the organization was alleged to be an unindicted co-conspirator in a major trial about funding terrorism.

Ibrahim Hooper, communications director of CAIR in Washington, D.C., said the unindicted co-conspirator charge against CAIR was legal “mumbo jumbo” that came out of the Holy Land Foundation trial in 2007. “The key word is ‘unindicted,’” he said.

One attendee, Alan Beard, said he was “100 percent in agreement with what John said, and I stand behind him.” “You just have to look at other countries like England and Australia where they’ve gotten a foothold,” he said.

Another listener asked how to get Islam out of school textbooks. “Islam has no place in these United States,” she said.

Also on Monday, Tulsa Metropolitan Ministry released a resolution calling for Bennett and Oklahoma Republican Party Chairman David Weston to apologize for remarks that “put all Muslims in Oklahoma in one group, associating them with terrorists and encouraging fear and wariness among our citizens against other citizens.”

The resolution was signed by more than two dozen groups affiliated with the local Say No to Hate Coalition, including the Jewish Federation of Tulsa, Tulsa Interfaith Alliance, Oklahomans for Equality and several churches.

Update:  Here is Bennett speaking to KWTV – News 9 and reiterating his view that all observant Muslims are potential killers: “I’m trying to educate people on Islam. And if they’re Muslim Americans and they subscribe to Islam, then they’re just as bad as ISIS, that’s overseas doing what they’re doing under the flag of Islam.”

“Bennett used text from the Quran and historic events to get his point across that American Muslims have an agenda — that is to destroy Western civilization and conquer the world. ‘Their goal is the destruction of Western civilization from within,’ Bennett said. ‘Muslims have worked their way into the government at every level. Their teachings give them permission to lie to unbelievers to gain their trust’.”