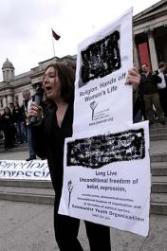 The One Law for All campaign – supported by the National Secular Society – is to be launched in the House of Lords on International Human Rights Day, 10 December.

According to campaign organiser, Maryam Namazie, “Even in civil matters, Sharia law is discriminatory, unfair and unjust, particularly against women and children. Moreover, its voluntary nature is a sham; many women will be pressured into going to these courts and abiding by their decisions. These courts are a quick and cheap route to injustice and do nothing to promote minority rights and social cohesion. Public interest, particularly with regard to women and children, requires an end to Sharia and all other faith-based courts and tribunals.”

Sure it’s received wide support. The campaign is backed by a total of ten organisations, five of which – Children First Now, the laughably misnamed Council of Ex-Muslims of Britain, Equal Rights Now – Organisation against Women’s Discrimination in Iran, the International Committee against Stoning and the Iranian Secular Society – are all front organisations for the Islamophobic far-left sect, the Worker-Communist Party of Iran. You do sometimes wonder whether the WPI has more front organisations than members.