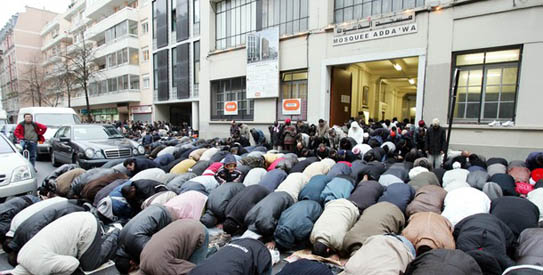 Praying in the streets of Paris is against the law starting Friday, after the interior minister warned that police will use force if Muslims, and those of any other faith, disobey the new rule to keep the French capital’s public spaces secular.

Claude Guéant said that ban could later be extended to the rest of France, in particular to the Mediterranean cities of Nice and Marseilles, where “the problem persists”. He promised the new legislation would be followed to the letter as it “hurts the sensitivities of many of our fellow citizens”.

“My vigilance will be unflinching for the law to be applied. Praying in the street is not dignified for religious practice and violates the principles of secularism, the minister told Le Figaro newspaper. “All Muslim leaders are in agreement,” he insisted.

In December when Marine Le Pen, then leader-in-waiting of the far-Right National Front, sparked outrage by likening the practice to the Nazi occupation of Paris in the Second World War “without the tanks or soldiers”. She said it was a “political act of fundamentalists”.

Nicolas Sarkozy’s party denounced the comments, but the President called for a debate on Islam and secularism and went on to say that multiculturalism had failed in France. Following the debate, Mr Guéant promised a countrywide ban “within months”, saying the “street is for driving in, not praying”.

Under an agreement signed this week, believers will be able to use the premises of a vast nearby fire station while awaiting the construction of a bigger mosque. “We could go as far as using force if necessary (to impose the ban), but it’s a scenario I don’t believe will happen, as dialogue (with local religious leaders) has born fruit,” he said.

Sheikh Mohamed salah Hamza, in charge of one of the Parisian mosques which regularly overflows, said he would obey the new law, but complained: “We are not cattle” and that he was “not entirely satisfied” with the new location. He said he feared many believers would continue to prefer going to the smaller mosque.