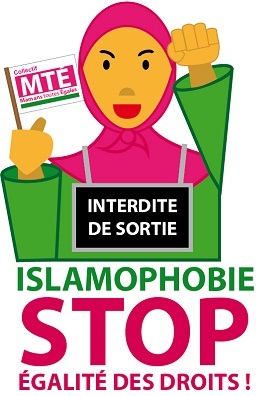 Le Figaro reports that the campaign has been stepped up for the withdrawal of the “Chatel circular” – the policy introduced in 2012 by the then UMP education minister Luc Chatel which proposed, in the name of defending secularism, that Muslim women who wear the hijab should not be allowed to accompany their children on school trips.

The policy has been maintained under the present Parti Socialiste government, despite a ruling by the Council of State last December that the ban was outside the law.

On Tuesday, for the first time, a delegation of Muslim women involved in the campaign against this oppressive policy met with a representative of current education minister Benoît Hamon to discuss the issue. And yesterday a demonstration was held near the ministry of education in support of the demand for an end to the ban.

Le Nouveau Poireau Rouge reports that, in addition to Muslim women with their children, members of the anti-Chatel campaign group Mamans Toutes Egales were there, along with activists from the feminist group Femmes en Lutte 93, Communist politician Hervé Bramy, sociologist Jean Baubérot and supporters of the left-wing organisations Ensemble and Front de Gauche.

Campaign supporters also issued an appeal to accompany the demonstration. Declaring that “the country of human rights has become the country of the rejection of foreigners, of the “others”, of all those who do not fit the dominant norm (white, male, Christian, rich)”, it demanded the repeal of the “sexist and Islamophobic” Chatel circular.

More photos of yesterday’s protest can be found on the Femmes en Lutte 93 Facebook page.