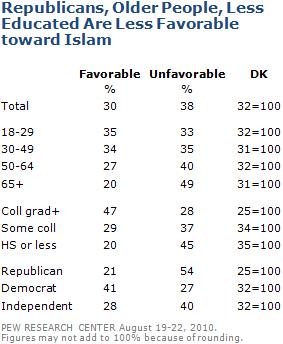 Americans doubt that Islam is likelier than other faiths to encourage violence, but their overall view of the religion has worsened over the past five years, a poll said Tuesday.

In a survey that underlined the complex views people have about Muslims, 51 percent agreed that a Muslim center should not be built near the former site of New York’s World Trade Center, compared to 34 percent who said it should be permitted.

Yet at the same time, a majority – 62 percent – said Muslims should have equal rights to build houses of worship. Just 25 percent said communities should be allowed to block the construction of mosques. The poll was conducted by the nonpartisan Pew Research Center.

The poll found that by 42 percent to 35 percent, most think Islam does not incite violence more than other religions, about the same as said so last year.

Republicans voiced negative views of Muslims by more than 2-1. Among Democrats, 41 percent had favorable opinions while 27 percent viewed them negatively. Views of Muslims were also unfavorable among independents, older people and those with less education.

It is perhaps surprising that so many US citizens do have a positive opinion of Islam when they are subjected by their mass media to bigoted crap like this.