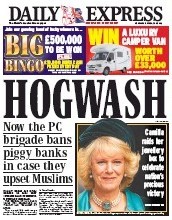 “Remember the political-correctness-gone-mad story about the Halifax and Nat West banning piggy banks so as not to offend Muslims? The Daily Express led with it, as did several internet news sources and a few of the more intemperate blogs. Well, Australian Mediawatch reveals that it wasn’t true.

“The Halifax press office said in an email to Mediawatch: ‘Halifax has not withdrawn any piggy banks from branches. As a matter of fact we have not used piggy banks in our branches for a number of years.’ And the media relations office of the Nat West wrote: ‘There is absolutely no fact in the story. We simply had a UK wide savings marketing campaign, which included pictures of piggy banks, running until the end of September. Piggy banks have been and will continue to be used as a promotional item by NatWest’.”

Credit where it’s due, though. Two weeks ago even that most intemperate of anti-Muslim bloggers, Robert Spencer, admitted that he got it wrong.

The question is why anyone ever swallowed this patently bogus story in the first place.