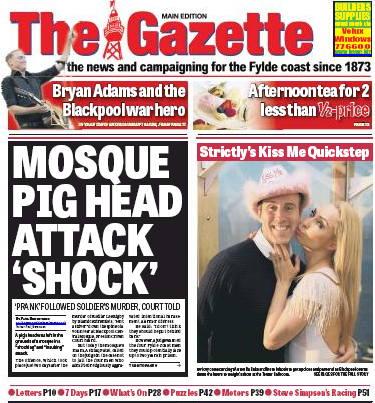 A pig’s head was left in the grounds of a mosque in a “shocking” and “insulting” attack.

The offence, which took place just two days after the murder of Fusilier Lee Rigby by Islamic extremists, “sent a shiver” down the spine of a volunteer at Blackpool Central Mosque, Preston Crown Court heard.

But today the mosque’s Imam, Ashfaq Patel, called on the judge in the case not to jail the four men who  admitted religiously aggravated intentional harassment, alarm or distress. He said: “I don’t think they should be put behind bars.”

However, a judge warned the four Fylde coast men they could potentially face up to two years in prison.