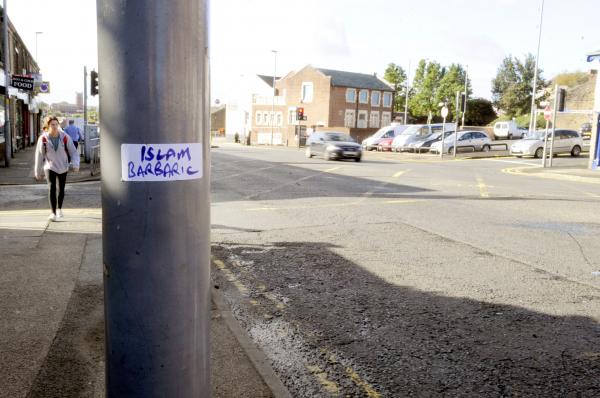 Anti-Islamic messages stuck on lampposts in Astley Bridge have been condemned by police.

Stickers penned with “Islam barbaric” and “Evil Islam” were posted on traffic lights and lampposts in Blackburn Road yesterday morning.

An off-duty police officer spotted the labels on his way to work and had them removed immediately. Three messages were posted opposite the junction with Lawson Street and another in the small car park – behind the former Three Pigeons pub – in Blackburn Road.

Police said “robust action” would be taken against anyone caught posting racist or offensive messages in public or online.

Det Insp Charlotte Cadden, from Bolton North Neighbourhood Policing Team, said: “Because the content of the stickers was insulting, we have recorded a hate incident rather than a hate crime. We take robust action wherever possible and drive prosecutions, where the level of abuse or threats warrants it.”

In a separate incident in July, a teenager was arrested for allegedly posting a racist threat against a mosque in Astley Bridge on Facebook.

Det Insp Cadden added: “If racist signs are displayed in public or racist comments are made on social networking sites, we will take swift and robust action.”

Business owners in Astley Bridge have labelled the notes as “cowardly”.

Christine Whitaker, owner of the Fresh and Tasty Sandwich Shop, said: “I speak to lots of businesses owners of all different backgrounds and we get on very well. “I think it’s cowardly to leave stickers like that in the street.”

Fiyaz Mughal, director of the Tell MAMA Campaign – Measuring Anti-Muslim Attacks – said: “This is mischievous and all of us as communities should send a message that we are united in our stance against any form of bigotry and hate.”