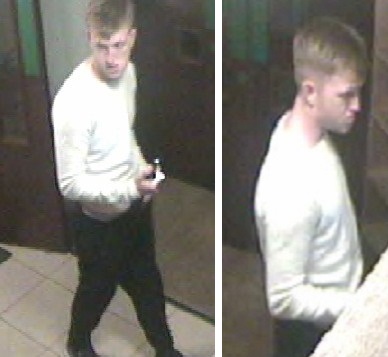 Police hunting a ginger-haired yob who broke into a Blackpool mosque and urinated on the floor are treating it as a religiously-aggravated crime.

The man was caught on camera breaking into the Revoe Street Mosque late at night before he wandered through a number of rooms and urinated in the reception area.

He then fled the scene. He is described as white with ginger or light brown hair, shorter on the sides than on the top and is thought to be 19–22-years-old. He was wearing a long sleeved white top, black trousers and Nike trainers.

Police say it is believed he was one of four or five men who have entered the mosque grounds through a gate. He is then thought to have forcibly gained access to the building through a wooden side door.

The incident happened at 11pm on Friday September 12 but police only released the details yesterday.

PC Paul Michael, of Blackpool Police, said: “We are keen to speak to the man pictured in connection with our inquiries and I would urge anyone with information that could help us with our investigations to contact police on 101 quoting AM1410823.”

This is not the first time the mosque has been targeted. In May 2013 a pig’s head was thrown into the building during prayer time.