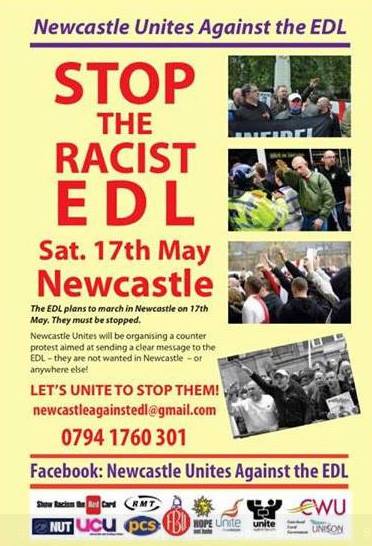 Northumbria Police’s Chief Constable Sue Sim has asked the far-right group to alter the route for its demo believing it would cause distress to residents. However, The EDL has refused to compromise with the force.

Chief Cons Sim said: “Northumbria Police has been speaking to organisers from the English Defence League for a number of weeks following their announcement that they want to hold a march in Newcastle on Saturday, May 17.

“The EDL expressed an intention to march in the West End of the city through a highly populated, residential area. We have made our position clear that we do not support this as the impact on the local community is too great. It poses a risk to public safety, will cause people fear in their own homes and create significant disruption as people try to go about their daily lives.

“Northumbria Police has always tried to facilitate peaceful protest and has worked with the EDL in the past to agree suitable routes for them to march and protest. We also regularly work with other groups with a range of opposing views to agree routes for marches and protest locations.

“Regrettably, this time EDL organisers have not been prepared to compromise on an alternative route, although we would remind them we are still prepared to discuss alternatives.

“Those planning to attend should be aware there has been no agreement with police with regards to meeting points or route locations.”

Protest group Newcastle Unites has also spoken to police about marching through the West End tomorrow. After discussions, the route of this demonstration was altered.

It is understood officers will not allow the EDL marchers to enter the West End.

Mrs Sim has vowed that officers will be out on the streets to ensure all protests pass peacefully and that residents’ safety will be a priority.

She added: “We have an excellent history of harmonious relations between all our communities and the public should rest assured that their safety remains our priority. We will not allow anything to disrupt their way of life or any marches to take place in residential areas.

“Our neighbourhood officers, known to local communities, together with other officers will be out and about in the run up to and throughout Saturday to reassure local people and answer any questions they may have. We have also been working with representatives of the local community and partners in the run up to the weekend.

“We do expect Saturday to be extremely busy in Newcastle but it will be ‘business as usual’. There are a number of events going on in the city centre and surrounding areas but there is no need for anyone to change their plans or avoid the city.”

Northumbria Police’s Police and Crime Commissioner, Vera Baird is now appealing to the EDL to get in touch.

She said: “The Chief Constable has made an operational decision that no march or demonstration should be allowed in the west end of Newcastle on March 17, and, although I do not make operational decisions, as the Police and Crime Commissioner I agree and support her wholeheartedly. Few people would wish to have their communities disrupted in that way, including probably those who want to protest.

“In previous demonstrations, protests and marches by the EDL, they have accepted the request to discuss the route and the details with Northumbria Police, who have a good history of protecting the right to protest whilst ensuring that people who are not involved are not seriously inconvenienced.

“It is disappointing that the EDL have refused to give details of their plans to the police. I would appeal to them to make contact now and agree reasonable arrangements as usual.”

Councillor Dipu Ahad has posted the following appeal regarding the Newcastle Unites counter-demonstration: 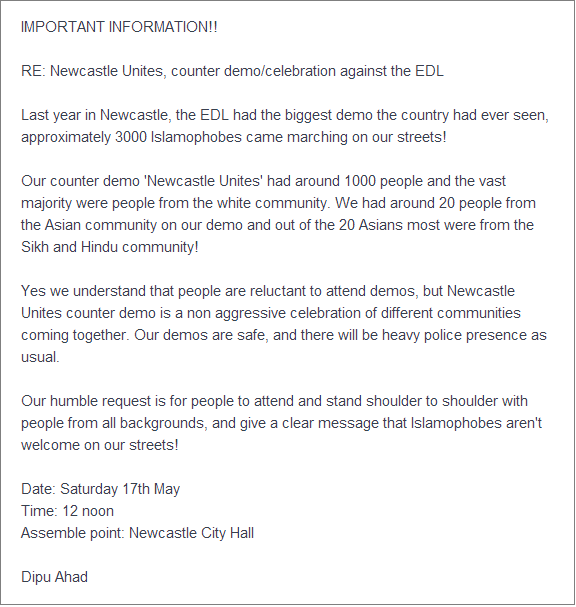