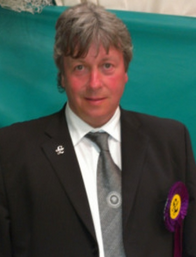 Police have now stepped in to investigate allegations of racism [see here and here] against three newly-elected UKIP politicians on Lincolnshire County Council.

Officers will probe claims of racist Facebook rants by leader Chris Pain [pictured] and two colleagues. The authority referred the case to police following “several” complaints from members of the public. All three councillors deny making the comments and say their accounts were hacked.

A spokesperson for Lincolnshire Police said a detective inspector had been put in charge of the case. The UK Independence Party itself is also investigating. In a statement to the Echo, national leader Nigel Farage said: “There is an investigation into the comments. The party’s national executive committee will be holding a hearing into this situation.”