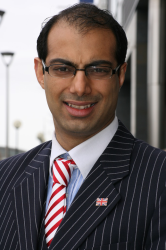 The Daily Mail provides a platform for UKIP Islamophobe Abhijit Pandya to defend his support for Geert Wilders and his view that Islam is “morally flawed and degenerate”. The article also features an ignorant attack on the All-Party Parliamentary Group on Islamophobia. Pandya is evidently unaware that this initiative has been sabotaged by supporters of Policy Exchange, who packed the APPG’s last meeting and ousted its secretariat.

The Mail is obviously very enthusiastic about Pandya, this being the third article by him it has published in the past week (in its “Right Minds” section, edited by Simon Heffer). The first was entitled “Uncontrolled immigration is destroying Britain’s literacy” and the second “Labour’s two-faced immigration apology still makes too many excuses”. As the EDL and BNP have already discovered, it’s very useful to have a right-wing bigot with brown skin making the kind of arguments usually associated with white racists.