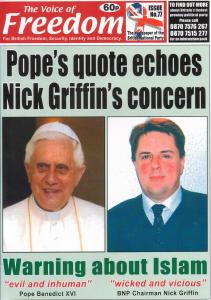 Under the headline “Pope’s quote echoes Nick Griffin’s concern”, the British National Party claims, not entirely unreasonably, that Pope Benedict’s attack on Islam bears a certain similarity to that made by BNP leader Nick Griffin:

“The Department of Public Prosecutions must be cursing the Pope after his remarks on Islam appeared to echo those of the British National Party chairman.

“In a speech to BNP members, Nick Griffin warned those present that Islam was a ‘wicked and vicious’ faith. These words and his chillingly correct prediction that 2nd generations Muslims living in Britain would become Britain’s first suicide bombers, led to him being arrested and charged with inciting racial hatred.

But now Pope Benedict XVI, in a lecture at a German University, has quoted a Byzantine emperor who characterized the Prophet Mohammed as introducing ‘things only evil and inhuman’ to the world and spreading Islam by the sword. As if to prove him correct, Muslims responded by burning down churches and killing a nun.”