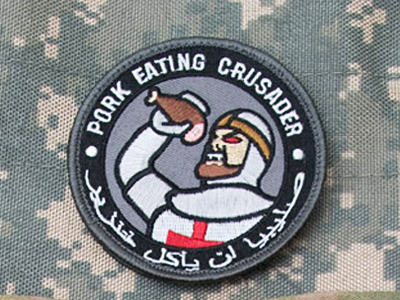 With tensions at an all time high in Afghanistan following the Koran burnings, the urination video, and the killing of 16 civilians, attention is now falling on a long line of “Infidel” apparel and gear.

Exhausted from how they feel they’re being perceived, troops have taken to wearing patches and carrying items that label themselves infidels, and offer translation in local dialect.

The word infidel means literally “one without faith” who rejects the central teachings of a major religion, like Islam.

Military.com tracked down Clayton Montgomery at Mil-Spec Monkey, a large online seller of infidel gear, who says his most popular item by far is the “Pork Eating Crusader Patch.”

The patch includes an image of a knight in a Crusade’s tunic, eating what appears to be a large ham hock, and lest there be any confusion – a translation in Arabic.