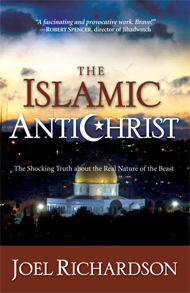 Richard Bartholomew draws our attention to the publication by WorldNetDaily of a new book, The Islamic Antichrist: The Shocking Truth about the Real Nature of the Beast, by one Joel Richardson. It is advertised on the WND site as a “devastating account of the possible connection between the Biblical Antichrist and the Islamic Mahdi”.

WND explains: “The Bible predicts that in the last days a charismatic leader will establish a global following in the name of peace. The Koran also predicts that a man will rise up to lead the nations, pledging to usher in an era of peace. The man in the Koran is called the Mahdi, or Islam’s savior. However, the man in the Bible is the Antichrist. Could it be possible that this is the same person?

“Richardson’s stunning research and analysis suggest that it is. In ‘The Islamic Antichrist’, he exposes Western readers to the traditions of Islam and predicts that the end times may not be that far away. His book will stun readers who are unaware of the similarities between the Antichrist and the ‘Islamic Jesus’.”

Richard Barthlomew also notes a follow-up post at WND in which Joel Richardson suggests that the election of Barack Obama may well foreshadow the arrival of the “Islamic Antichrist”. The article is subtitled: “Massive wealth redistribution will be economic policy of the Beast”!

WND explains: “Richardson says the Book of Daniel reveals the Antichrist will invade the wealthy nation of Israel specifically to plunder and gain control of its commodities and wealth. ‘But what is so interesting is the Bible tells us his reason for seizing this wealth is to give it away to his followers,’ says the author. ‘While slightly more violent than Obama’s tax plan, it is no less populist in its methodology of radical wealth redistribution’.”