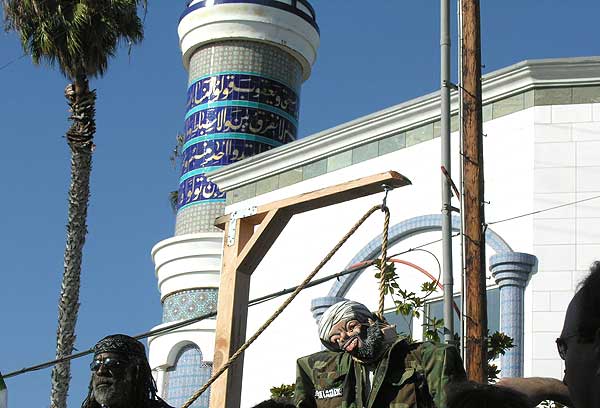 Activists hanged an effigy of Osama Bin Laden across the street from a Southern California mosque Sunday to protest radical Islam on the fifth anniversary of the Sept. 11 attacks.

With a crowd of about 100 people shouting “Remember 9-11!” and “No more Jihad!” two men on the back of a pickup truck slipped a noose around the neck of a dummy wearing a Bin Laden mask and strung it up, while the crowd pelted the effigy with shoes.

The protest was organized by the United American Committee, a group that says it promotes awareness of internal threats facing America.

About 70 counter-protesters described the King Fahd Mosque as a peaceful center for area Muslims and yelled “racists go home!” during the ritual. A group of clergy joined hands with some of the mosque’s worshippers and stood in a circle in front of the mosque.

“I think it’s crazy,” said mosque spokesman Usman Madha. “We have never encouraged extremism. We were the first mosque that condemned the Sept.11 atrocities and we kicked out a few people that protested that condemnation.”

In 2003, Jewish Defense League activist Earl Krugel pleaded guilty to conspiring to bomb the mosque along with the office of San Diego congressman Darrell Issa.

Robert Spencer can’t understand why supporters of the mosque should object: “… why is it that when the United American Committee hanged Osama in effigy, the members of the King Fahd mosque didn’t eagerly join in, happy for the chance to show that they’re patriotic Americans who are outraged at what bin Laden and his ilk have done to their faith? Why instead did they mount counter-protests crying racism?”

For photos of the protest and counter-protest, see LA Indymedia, 10 September 2006 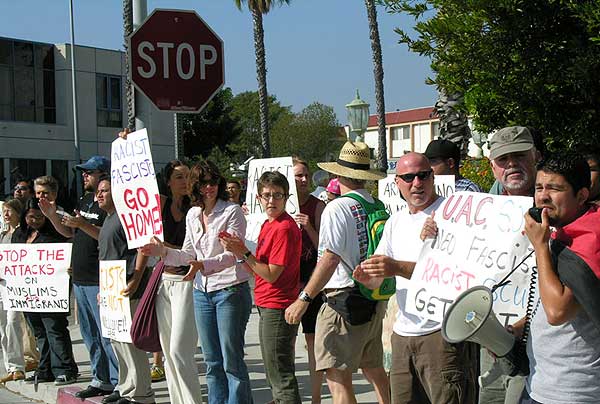