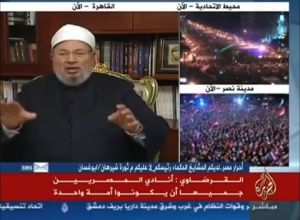 As the political crisis in Egypt escalates, dividing Egyptians into supporters to President Dr. Mohamed Morsi and protesters, Dr. Yusuf Al-Qaradwi addressed the Egyptian people in a televised speech broadcasted by Al-Jazeera Channel on Sunday, June 30, 2013. Dr. Al-Qaradawi called Egyptians to adopt dialogue to reach a solution for the current deadlock and to steer clear of all causes of disagreement.

“It is saddening me that I cannot find you (the Egyptian people, united) in one camp so that I can address all of you. Unfortunately, Egyptians are divided. So I refused to respond to support one party at the expense of the other… because I would like to address the whole Egyptian people as I did before in the Victory speech that marked the triumph which Allah granted to the (January 25th) revolutionaries.”