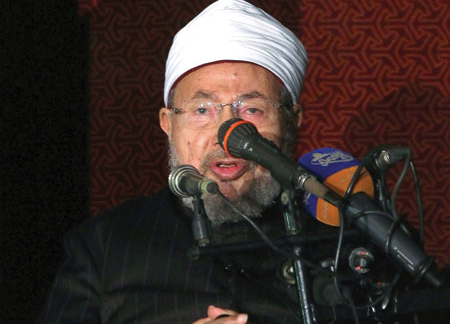 Delivering the Friday sermon at Al Azhar University Mosque in Cairo yesterday, he called on all Egyptians, Muslims and non-Muslims, rival political factions, the ruling elite as well as the opposition, to unite in the interest of their nation and to realise the goals of the January 25 revolution.

Al Qaradawi, who heads the International Islamic Scholars’ Association, said: “Our religion orders us to remain united and discourage disunity.”

His call for unity comes in the wake of President Mohammed Mursi facing challenges over the constitutional referendum.

The cleric said opinions can differ and this would enrich the nation, but to break national unity was not acceptable.

“The January 25 revolution has taught us to sacrifice for each other and we are all Egyptian and we are not angels. All of us, including the government and Muslim Brotherhood and the opposition, can commit mistakes, but we should not continue making mistakes,” said the cleric.

“I have met many liberals and secularists and they are not infidels. They all believe in God. We need to cooperate with them,” said Qaradawi.