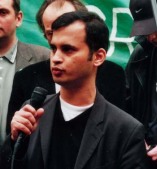 Questions are being asked about how the police and intelligence services handled an anti-terror raid in east London after the release of two men. Brothers Abul Koyair, 20, and Mohammed Abdul Kahar, 23, who was shot in the raid, were freed without charge.

Muslim Council of Britain chief Mohammed Abdul Bari said: “The question the community raises is the genuineness of the intelligence.” Mr Bari, who is secretary general of the Muslim council, told the BBC: “It all goes back to intelligence, and the police gave the reason for this massive raid. It all depends on how the police act now. There is an issue of trust.”

Met Police Authority member Murad Qureshi, speaking on BBC Radio 4’s Today programme, said: “I think that there were a series of mistakes, which I think that the Met should learn from, and they cover everything from the collecting of intelligence and how you corroborate that to the nature of the surveillance of suspects, through to how the suspects are actually dealt with.” Of particular concern, he said was “how we find ourselves with one of the brothers shot and quite a lot of the slander, quite honestly, which has been out in the press”.