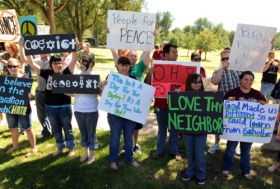 A planned Quran burning Saturday in Amarillo was thwarted by a 23-year-old carrying a skateboard and wearing a T-shirt with “I’m in Repent Amarillo No Joke” scrawled by hand on the back.

Jacob Isom, 23, grabbed David Grisham’s Quran when he became distracted while arguing with several residents at Sam Houston Park about the merits of burning the Islamic holy book.

“You’re just trying to start Holy Wars,” Isom said of Grisham after he gave the book to a religious leader from the Islamic Center of Amarillo.

Grisham, director of Repent Amarillo, which aims to deter promiscuity, homosexuality and non-Christian worship practices through confrontation and prayer, said he was just trying to exercise his right to free speech.

He announced Friday evening the plan to burn copies of the Quran to show support for the Rev. Terry Jones, pastor of a small church in Gainesville, Fla., who planned, publicized, then canceled his own Quran burning event after a national uproar.

More than 200 people, many packing signs, crowded into Sam Houston Park Saturday to either support or protest Grisham’s plan to burn the Quran.

Protesters threw their hands on the grill Grisham planned to use to burn the Quran, someone took his lighter and Isom stole the Quran, leaving him with just lighter fluid.

As the crowd jeered, Grisham got into a car and left peacefully without burning any copies of the holy book.