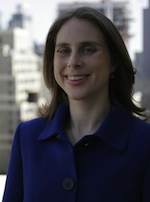 “I was very concerned that people might think that these ads speak for the Jewish community, as Geller couches her anti-Muslim message in the language of supporting Israel. The suggestion that she is speaking only about terrorists, and not about Muslims in general, falls apart as soon as you read her writings, which are fear mongering about Muslims in the U.S. and in the world, and about Islam as a religion.”

She adds: “I want to spread the message that 1800 rabbis – along with the majority of the American Jewish community – believes in partnership with our Muslim neighbors. We, of course, oppose all acts of terrorism. We will not, however, allow the actions of a small minority to be an excuse for dehumanizing an entire people.”