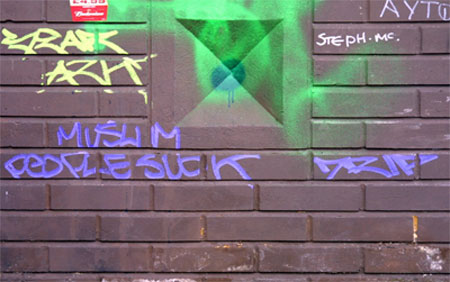 Vandals have scrawled racist graffiti on a community sports hall which is due to be leased to a Muslim group. The slogan Muslim People Suck was daubed on the side of Woodfarm Sports Hall in Thornliebank, which is to be converted into an after-school education centre.

The council-owned venue had been previously leased to the care charity Quarriers but has been empty since last summer. It’s emerged the Woodfarm Education Trust, a group backed by Muslim business leaders and professionals, is now in advance talks over a long-term lease. The new facility would host language and maths classes, social events and be open to the entire community, regardless of race or religion.

Local East Renfrewshire councillor Alan Lafferty said: “This graffiti is clearly the work of some misguided local person as no-one outwith the community was likely to have known about the plans. I am calling on the local community to join me in condemning this criminal action and to let the police know who did it. Otherwise, it is a stain on the reputation of the entire area.”