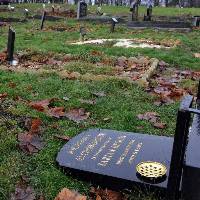 A third attack on Muslim graves in a Leeds cemetery in nine months is being treated as “mindless racial vandalism” by police. Detectives probing the damage to 24 graves at Harehills Cemetery on Sunday night are now combing CCTV footage.

After the second attack on Muslim graves in September police installed covert CCTV cameras to deter further damage and that footage is being examined by North East Leeds CID and further forensic work carried out.

The first attack on the cemetery took place in March this year.