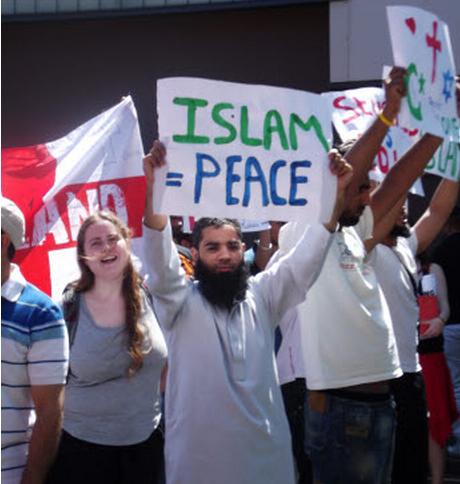 Redditch residents put on a show of unity and defiance as a march through the town from the EDL passed off peacefully.

More than 100 officers were drafted in from across the West Mercia force area as well as Warwickshire, West Midlands and British Transport Police to help control the event and tensions were high throughout the day as a large counter demonstration, made up of residents from all sections of Redditch’s community and members of United Against Facism, attempted to get near to the main EDL rally.

Between 100 and 150 members of the EDL from across the region turned out for Saturday’s rally which saw speeches made from the bandstand although police officially estimate the figure at about 40. The event lasted for about half an hour during which members of the group urged people to “wake up to the facts” about Islam and made a number of anti-islamic statements and chants.

Trouble flared when passers-by from the afro-caribbean community angered by some of the comments attempted to intervene with the rally and a lager can appeared to be thrown from the EDL side, but officers quickly intervened. In total there were three arrests – one for a breach of the peace and two on suspicion of assault – and police say they were all men and believed to have been attached to the counter EDL demonstration.

EDL member Ed Stevens said they were trying to raise awareness about the threat of Islamic grooming of young white girls. “It’s an awareness campaign, more than anything particularly connected to Redditch. There have been one or two minor incidents around this town but the main thing is we are coming to town and cities everywhere to say take notice of what’s going on in your country.”

But after the group left about 3pm the larger counter demonstration, with an estimated 500 people involved and which had been held back for most of the day in Easemore Road, marched through the town down to the railway station and back again before holding a brief rally also at the bandstand.

There are now plans to set-up a Redditch Against Facism group.

Safder Hussain, one of the organisers of the counter-protest, said: “The message we have sent to day is straightforward, we do not want the EDL here, we are united and we are strong in that.

“Redditch is a mixed community, I have personally lived here for 40 years and I have never had race relation problems, 99 per cent of Redditch people are the friendlist, nicest people you could ever hope to meet. These people from outside Redditch are coming in to Redditch to spread their malicious, evil, garbage.”

Smallwood resident Charlotte Gallen added: “I have lived here all my life, we are proud of the diversity in our town and we always have been.”

Other faith groups across Redditch also lent their support to the counter-protest. Rev Dick Johnson, chairman of Redditch Churches Together, said: “We are together against what the EDL stand for, standing with those who want peace and unity in our community. In Redditch we are a united community and it’s wrong for people to come to this town and suggest their are problems – it’s just not true.”

Supt Adrian Pass, North Worcestershire Police Commander, thanked the people of Redditch for their support in ensuring the afternoon passed off peacefully.

“My appreciation goes to the local community for the very dignified and respectful way they held their protest and the way they conducted themselves. This was a great effort by the whole community and it is a tribute to all those involved the town is calm and everything is returning to normal.”

He called the arrests isolated incidents but added they would check film and CCTV footage to see if any incidents had been missed. “We always consider all of the facts but we did say we as the police would be dealing very robustly with any people who wanted to commit criminal acts and that’s what we did do.”

He added the council wanted to work with the community over the coming weeks and months to stage an event during the summer to highlight the town’s diverse community.

“The Redditch community did us proud and celebrated that diversity with a very peaceful counter demonstration. We have a really diverse community here in Redditch and one we are proud of. We want to work with the community over the coming weeks and months to organise something that is a celebration of Redditch.”